The EU is a Strategic Partner of the Serbian Economy 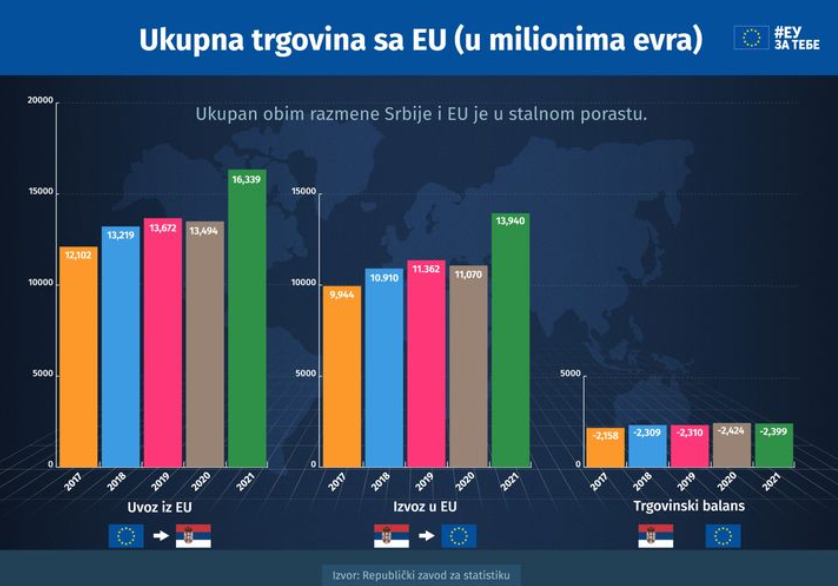 Serbia has made some progress in the development of a functional market economy, preserved the stability of the banking sector, improved the budget balance, and achieved some progress in tax administration reforms and the privatization of state-owned enterprises.  Further structural reforms of public administration and the management of state-owned enterprises are expected in the future, it was pointed out at the presentation of the "Annual Report of the European Commission on Serbia 2022" at the Chamber of Commerce and Industry of Serbia (CCIS).

The European Union is an indisputably strategically important partner of Serbia, first of all, in terms of business. Nothing connects the European Union and Serbia as well, strongly and qualitatively, as our economic ties, and that is why the economy of Serbia is sincerely interested in accelerating the process of accession to the European Union", said Mihailo Vesović, Director of the Sector for Strategic Analysis, Services and Internationalization in CCIS.

Vesović emphasized that it is extremely important, especially in the current global energy crisis, that Serbia opened Cluster 4 last year, which concerns the "green" economy and energy transition, and announced that the Chamber of Commerce and Industry of Serbia will present the Declaration "Green transformation of Serbian economy in 10 points". Speaking about Serbia's progress in terms of regional cooperation, he pointed out the importance of the "Open Balkan" Initiative and its benefits to the economy of the region but also emphasized that the economy of Serbia requires the EU to get involved in solving the problem of prolonged waiting time for the trucks at border crossings to the Union.

Jadranka Joksimović, Minister for European Integration, pointed out that the EC Report shows that Serbia has made progress in areas that are key for the economy, the judiciary, and the fight against corruption, and that the Report clearly states that the Serbian economy has made strong progress.

Joksimović also said that the European Commission made a decision to approve a package of measures for the Western Balkans in the energy sector, which will finance energy stability, security, and diversification of energy supplies. In addition, through the European Investment Plan, the European Union supports the transition to green energy, a sustainable economy, and environmental projects.

The Head of the Delegation of the European Union in Serbia, Emanuel Giaufret, said that Serbia is between a good and moderate level of preparedness based on economic criteria and emphasized the partnership in the field of trade and investment between Serbia and the EU. Giaufret called for the continuation of structural reforms in order to reduce the share of the state in the economy and improvement of the rule of law in general. He emphasized that the moment to speed up the reform course in Serbia is for the benefit of the economy and citizens.

The fight against corruption and an improved judiciary, as well as reforms in the public administration sector, were of vital importance for improving the investment climate, the EU ambassador said.

Giaufret pointed out that Serbia can continue to rely on the EU and that more than 60 percent of Serbia's total trade is with the EU, which annually gives our country more than 200 million euros in non-refundable grants for projects.

How important the EU market is for the Serbian economy is illustrated by the data that 65 percent of our exports go to the EU and 60 percent of imports from the Union, that 24,000 domestic economic entities trade with the EU, and 10,000 companies with a majority ownership by EU citizens operate in our country.